What a big turmoil it was in the house of baker Garhibl in Schönlaterngasse 7 in the early morning of June 12th, 1212.

Kathrin the maid was sent to bring water from the well.
Now she stood there and babbled something about a monster at the base of the well with bestial stench; and she also mentioned very strange sounds.

Baker Garhibl was furious about the alleged imaginations of the girl. But even he couldn’t deny that there was an unpleasant smell in the air.

“I’ll have a look,” said journeyman Heinrich. He took a torch; let him tie at a rope on which he could be hold by the baker and the other journeyman Hans.
Then he climbed down into the well.

Suddenly he screamed that it set someone’s tooth on edge.
The light from the torch was extinguished in the well. Baker Garhibl and Hans pulled him up quickly.

Heinrich was unconscious.
They opened his shirt and fanned fresh air to his face. Finally he awakened.

Then he fainted again.

It took about an hour, until the honourable Jakob von der Hülben, escorted by guards and a crowd of bystanders arrived at the baker’s house.

Gratefully and relieved the baker Garhible told him what had happened.

The town magistrate considered but he had no idea. There stepped a man out of the crowd – his name was Doctor Pollitzer, and it was known that he was well versed in all natural phenomena.

“A basilisk? What’s that?” Kathrin asked.

"When a rooster lays an egg," explained the man, "and the egg is hatched by a toad, and the offspring is reared by a snake, then the result is such a monster. Its breath stinks of decay and its vision is profoundly ugly. Who sees it, is doomed to death. No spear, no sword, not even fire can harm the basilisk."

The astonished crowd of people were horrified.

"Is there nothing which can destroy the monster?" Garhibl asked, already afraid that he had to give up his house.

"Hmm, yes, there is a possibility," replied the doctor. "One must dare to climb down with a mirror. When the beast is confronted with its own ugliness it will explode."

There was dead silence. Finally journeyman Hans said, “Let me try it,” he turned to the baker and continued, “and if I can make it would you allow me to marry your daughter Anna?”

Well, Garhibl knew that they both were in love but he couldn’t give his agreement so far because a journeyman wasn’t an adequate marriage for his daughter. But under these circumstances - so he nodded.

Quickly the wall mirror was brought out of the baker’s house. Hans was tied to a rope, Anna put a little wax in her fiancé’s ears; then the brave climbed down into the dark well, like a shield he held the mirror in front of him.

Suddenly the folks heard a horrible heartrending scream let out by the basilisk. And then a deafening bang.

“It’s dead!” Hans’ voice echoed out of the well. 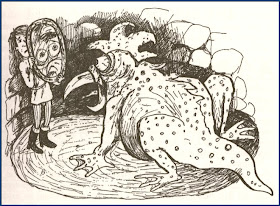 Safely although a bit hard of hearing in spite of the earplugs Hans to the cheers of the crowd climbed out of the well.

Unfortunately Heinrich the journeyman who had seen the basilisk died the same day.

Garhibl and his folks filled the well with stones and earth.


Special thanks to JRD Skinner and the Flash Pulp Crew for putting the legend on their 'FlashCast 27 - Exploding Basilisk' !